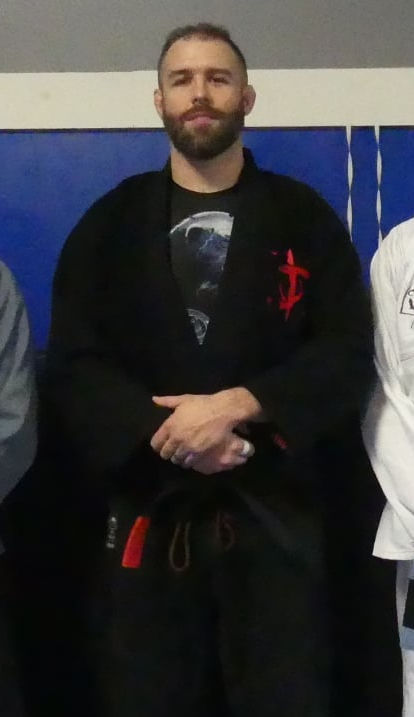 Professor Gavin Wageman has trained 8.5 years in BJJ (Gi and NoGi) and is a BJJ Black Belt Under Professor Mike Desrosiers affiliated under Professor Nic Gregoriades through Subconscious Jiu-Jitsu. Gavin first was impressed with BJJ when he took a beginner class and was very quickly defeated and submitted by opponents that he far outweighed and was stronger than (two 140lb women and an 11 year old child to be precise). In his competitive spirit, he found that size, strength and physical prowess meant little to those who understood the techniques applied through leverage and timing as found in BJJ, and began his training in late 2013. Finding passion within the physical, mental and emotional grounding from the competitive nature of the sport via yearly competitions, the camaraderie that comes with such surroundings have given him a bastion of happiness where he is just as much at ease with being on the mats as he is in any room of his own home. Knowing how hard it can be for newcomers to find their rhythm on the mat and very high attrition BJJ is notorious for, Gavin prides himself in sharing his knowledge and works hard to be a welcoming ambassador to people new to this Martial Art and is always up for giving his knowledge or a test of skill through rolling. All in the hopes that BJJ gives people the peace of mind and incredible community it gave him so many years ago.